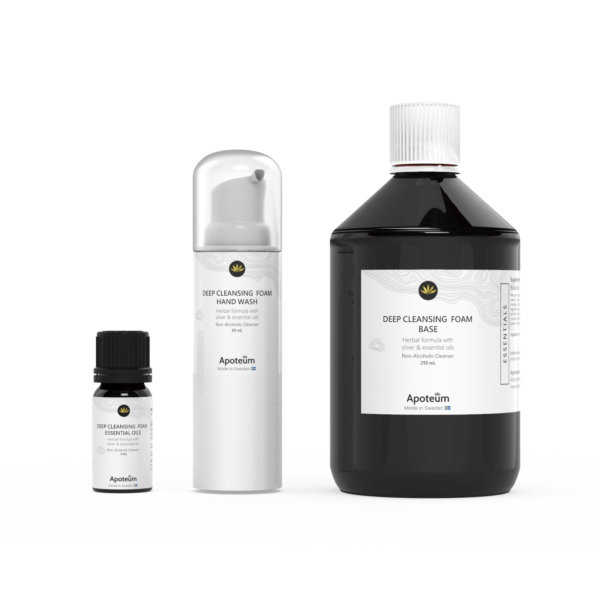 Our Deep Cleansing Foam DIY kit is made for your convenience, with as natural and potent ingredients as possible, so that you can carry it with you at any time and use in all situations. Easy to put together, the unique combination of jojoba oil and aloe vera in this product will keep your skin from drying out, while the colloidal silver and essential oils will benefit the cleansing!

With each purchase, you get a DIY kit containing one foamer of 50ml, one essentials bottle of 5ml, and one soap base of 250ml.

How to use our Deep Cleansing Foam?

Our Deep Cleansing Foam DIY kit is super-easy to put together, taking no more than 30 seconds. It comes in three parts: an olive and coconut oil soap base in a 250ml bottle, colloidal silver in a 50ml foamer, and a 5ml glass bottle that not only contains jojoba oil and aloe vera concentrate, but also the essential oils of tea tree, lemon, eucalyptus, and myrrh, all of which are known to be antiviral and antibacterial. Just pour the colloidal silver and essentials into the 250ml soap base bottle, stir gently, fill up the 50ml foamer, and you’re good to go!

The concoction is incredibly concentrated, ensuring that it will be long lasting. When using this product, make sure that you wash every inch of your hands, for at least 20 seconds, and then wash thoroughly. The jojoba oil and aloe vera extract will keep your hands moist even after repeated use, so don’t let that deter you from keeping your hands clean.

(In situations where there is no water, the product can be used as an antiviral hand lotion)

Colloidal silver is made by infusing distilled water with nanometer sized silver particles. Silver has been used during the ages as a purifier, as it’s believed that it has potent antiviral, anti-fungal, and antibacterial properties (this is most likely the origin as to why people believed that silver bullets would kill werewolves). In modern days, silver has regained its popularity due to its potential to act as a broad-spectrum antimicrobial agent.

Jojoba oil comes from the seeds of the Simmondsia chinensis shrub, native to northwestern Mexico and southern Arizona and California. It was discovered after the U.S. put a ban on imported whale oils, and has been used in pharmaceutical and cosmetic products, with the main focus on skin and hair care. It is known to be highly moisturizing, and as the makeup of the jojoba oil is very similar to the oil that our skin naturally produces, it is easier for our skin to absorb it without having to worry about any pores being clogged. Jojoba oil also contains a few antifungal and antimicrobial properties.

Tea tree oil is made from the leaves of the small tree Melaleuca alternifolia, that can be found in Australia. It has been used by the Aborigines as a medicine for centuries, to treat colds and coughs, as well as in wound healing. Tea tree oil contains a compound called terpinen-4-ol, which has the ability to kill certain bacteria, viruses, and fungi, thereby boosting tea tree oil’s reputation of working as an antiseptic and anti-inflammatory agent. This makes tea tree oil an ideal natural hand sanitizer.

Aloe vera originates from the Arabian peninsula, and belongs to the succulent plant species, of the genus Aloe. It is highly popular, being a common ingredient in health and hygiene products, as well as in foods and beverages. It is used to treat burns, be that from fire or the sun, and the moisture in the gel part of the plant is believed to accelerate the healing process, while at the same time soothing the skin. Aloe vera also contains some powerful antioxidants, that when combined with other compounds in the plant, gains antibacterial properties.

Lemon essential oil is derived from the fresh peel of the lemon, through a cold-pressing process. For many years people have believed that lemon oil has antibacterial properties, but it isn’t until recent years that research has been made in this field. It has been used as a home remedy to treat colds and sore throats, as well as help improve skin blemishes, such as acne outbreaks. When put in a diffuser, students use it to help them concentrate during studies, saying that the sweet, tangy scent clears their minds.

Eucalyptus is a tree that’s native to Australia, but is now grown all over the world. The essential oil is made from the leaves of the tree, being dried, crushed, and then distilled. The leaves have been used as medicine by the aborigines of Australia for many years, in everything from wound healing, to cold treatment, to bug repellant. In the form of essential oil, people have continued to use it for such means, and in the medical world there is evidence that eucalyptus oil was used to clean urinary catheters, because of its antimicrobial properties. Nowadays, it has started to regain its former popularity, and pharmaceutical companies have started to incorporate eucalyptus into their products to create gentler versions of them. The oil has also found its way into many cosmetics, dental preparations, and perfumes.

Myrrh is the dried sap that comes from the Commiphora myrrha tree, native to northeast Africa and southwest Asia. It has a secure home in traditional Chinese and Ayurvedic medicine, and is one of the essential oils that the ancient Egyptians used when embalming their mummies. In Biblical times, myrrh was burnt together with frankincense in temples to purify the air and prevent the spread of contagious diseases. Scientists believe that this was because myrrh has the ability to kill bacteria and microbes.

Rosemary is a Mediterranean mint herb, of the Lamiaceae family. It has been used for culinary purposes in many kitchens, both for its pleasant taste and richness in iron, calcium, and vitamin B-6. Traditionally used as folk medicine to treat muscle pain, hair loss, and boost immunity, the rosemary oil is also believed to help improve memory and focus. In our products, the rosemary oil is used as a natural preservative. 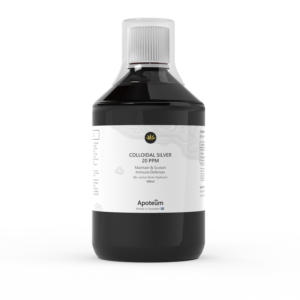 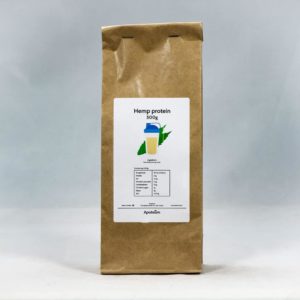 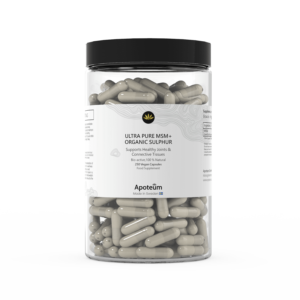