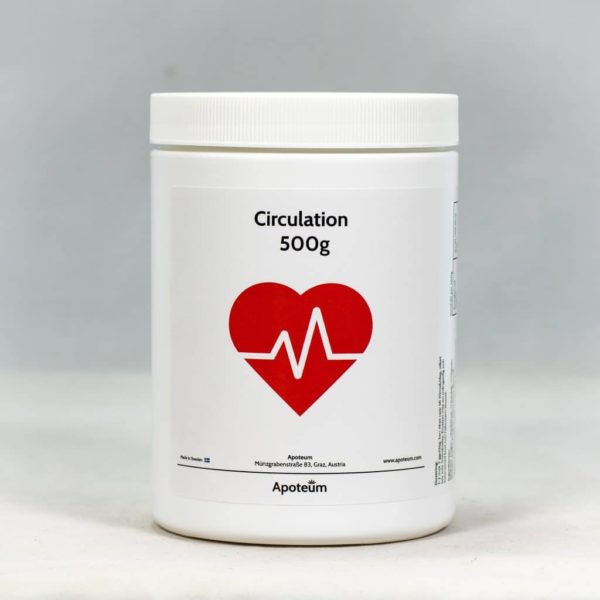 Our Circulation Powder is made from a unique blend of vegetables, berries, and herbs, such as beetroot, lingonberry, shiitake, and dandelion. This potent mix of plants is well selected to serve the needs of our people to resist the rough, northern nature of the beautiful, wild Scandinavia.

This product is made with the intent to create a potent mix to boost your circulation and balance out your body. The ingredients are known for their anti-inflammatory properties, as well as their high nutritional value. It contains no fillers, preservatives or added colours. It is vegan friendly and gluten free.

All ingredients are carefully extracted and refined by Apoteum.

The Circulation Powder for cardiovascular health: what is this supplement?

Our Circulation Powder contain a potent mix of a wide array of plants and such, to form the perfect food supplement for cardiovascular health.

High blood pressure and cholesterol are major health issues in the world today, and heart diseases have long been the leading cause of death in many countries. To combat this, it is important that we take better care of our cardiovascular health. A healthy diet, regular exercise, and maintenance of a healthy weight are all important things to keep in mind, as it is lack of these things that in many cases leads to bigger problems as we age.

Keeping this in mind, the Circulation Powder aim to give you that extra health boost that you need in your daily, hectic life. While it can not (and should never be used as) a substitute for a healthy diet, it can still offer some aid in balancing out your meals.

Ingredients that can improve your blood circulation

Beetroot, also known as red beet, is a common vegetable around the world. Not only does it taste good, it is also packed full of vitamins, minerals, and other nutrients, such as vitamin C, vitamin B6, folate, manganese, potassium, iron, inorganic nitrate, and so on. The nitrate in the beetroot is believed to help lower blood pressure, as when consumed dietary nitrate turns into something called nitric oxide, that dilates blood vessels. This causes blood pressure to drop, improves blood flow, and if consumed regularly, beet is believed to help avoid heart diseases and age related brain issues. It is also a good source for fiber.

Lingonberry (vaccinium vitis-idaea) is a small, red berry that can be found in the Northern Hemisphere, and is often used in dishes, especially in Sweden. Also known as cowberry, the lingonberry is rich in vitamin A, B, C, E, phosphorus, iron, calcium, potassium, and antioxidants. It has anti inflammatory properties, and has been used to treat UTI (urinary tract infection). There is now also speculation as to whether or not lingonberries can help reduce the cardiovascular damage the body receives when fatty food is consumed. Both the berry and leaves of the shrub can be consumed after preparation.

Red clover is a part of the legume family, together with peas and beans. The part most often used in herbal medicine is the flower of the clove, as it contains calcium, niacin, magnesium, potassium, vitamin C, and so on. It also has compounds called isoflavones, that can act as a phytoestrogen, a chemical highly similar to that of the human estrogen. In alternative medicine, red clover is used for cardiovascular health, improve functions of the heart, and strengthen and increase elasticity of blood vessels and capillary walls.

Cranberry are native to North America, and is known for its high antioxidant amount, which makes some consider it a superfood. The Native Americans have used this berry to treat bladder and kidney diseases, while the early English settlers used it for stomach issues, blood disorders, and scurvy.  Many of these uses are still common today,  as it is often recommended as a household remedy to drink cranberry juice or eat cranberry concentrate if you are suffering from UTI, and as a means to control your cholesterol levels and heart health.

Nettle, or more specifically stinging nettle, has been used for centuries, as far back as by the ancient Greeks, to treat a wide arrange of ailments. It grows wild in many of the European countries, as well as Northern America. The list of all the nutrients that nettle contains is long, but they include everything from vitamins, minerals, and polyphenols, to fats, amino acids, and pigments. The use of the plant is just as long and varied. The root has been used for urination problems and joint ailments, while the stem and leaves have been ingested for allergies, osteoarthritis, anemia, asthma, or used as an ointment for skin issues such as rashes, eczema, and hair loss. The tender, new leaves of the stinging nettle are also consumed as vegetables, after having been cooked to remove the sting from them.

Shiitake comes from Asia and has been used both as food and in traditional Asian medicine, where it’s believed that it boosts health, longevity, and circulation in the body. Shiitake is rich in fiber, minerals, and vitamins, such as copper, zinc, vitamin B5 and B6, just to name a few. The mushroom is low in calories but high in fiber, making it a popular dish for those more health conscious.

Celery belongs to the same family as carrots and parsley, and is 95% water. The rest of the plant consists of fiber, vitamins and minerals, and protein and fat is so low a dose that celebrities sometimes eat celery to lose weight. The most potent of the vitamins found in celery is vitamin K, which helps blood to clot. It also contains calcium which strengthens bones, and celery has been used in traditional medicine to treat ailments such as high blood pressure, high cholesterol, and constipation. It is also highly appreciated as a spice for cooking.

Dandelion is also known as that pesky little weed in the garden that you just can’t get rid of. That being said, it is actually considered a herb, and has been used for centuries in traditional medicine across the world. Dandelion is rich in vitamin A, C, and K, as well as many minerals, such as iron, calcium, potassium, and magnesium. The yellow flower of dandelion contains the antioxidant polyphenols, while the plant is full of another antioxidant called beta-carotene. The root of dandelion contains a soluble fiber by the name of inulin, which is believe to support healthy bacteria flora in your intestinal tract, which in turn leads to a healthy digestion. In traditional medicine, it’s been used to treat inflammation and constipation.

Broccoli contains something called sulforaphane, a bioactive compound believed to help with healthy aging and support of the cardiovascular system. It is also rich in vitamins and minerals, some of those being iron, zinc, phosphorous, calcium, vitamin A, B6, B12, D, E, and K. But the star component of broccoli is the amount of antioxidants that it carries. These antioxidants can help the brain stay healthy, keep age-related issues at bay, and together with all the fibers found in broccoli, it can also aid in keeping the blood sugar balanced.

Be the first to review “Circulation Powder” Cancel reply 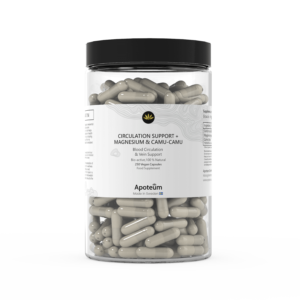